Misadventures of Andrew Lenz and a yellow ball

A Paddle of My Own

The following day, Tuesday, February 21, 2017, I wrote my friend John telling him of my efforts to find a local cheap “get me by” paddle. He reminded me that he said he’d loan me one of his extra paddles until I found a good one to purchase for myself. Duh!

I emailed John asking him to drop his extra paddle off at my work the next time he happened to be nearby but not to make a special trip. Of course, it showed up less than three hours later in my office while I was out to lunch. Thanks, John! 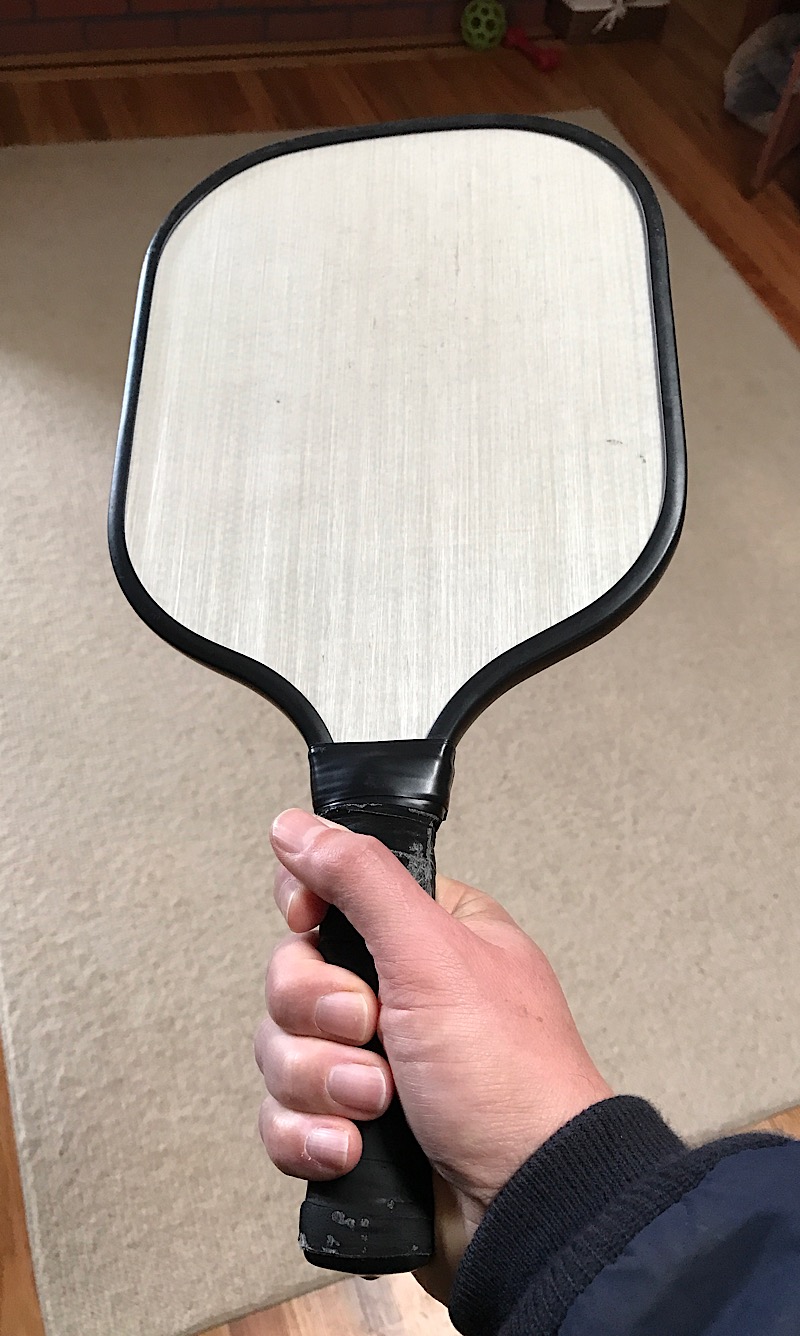 John had picked up this paddle from a fellow in the club at a good price. It has seen some use, some dings in the faces are visible in the right light, but it gets the job done.

I should point out that the photo shows that the paddle grip is a bit small for my hand. I’ve heard from two sources—one an online paddle retailer video, another from a pickleball instructor in a podcast or YouTube video—that there should be a gap equal to the width of your finger between the ends of your fingers and the meaty part of your thumb. It’s always best to get a paddle with a grip that is too small that too big. Too small, you can put an “overgrip” on it. Too big, you are out of luck unless you shrink your hands in the dryer! An overgrip is  a strip of material that you wind around the handle of your paddle.

Here’s a really good video for installing one on a tennis racket:

and here’s a short video that’s not as detailed but specific to pickleball paddles:

The key thing to note is that the handle on a pickleball paddle significantly shorter than that of a tennis racket and you only need about three feet of overgrip for a paddle. Therefore if you use a tennis racket overgrip on your paddle, unless you want to overlap the wraps significantly, you’ll end up with a fair amount of leftover material. Pickleball paddle overgrip is pretty reasonable, typically between $5 and $10 for a package with 2-3 rolls.

With balls, a simulated partial court and a paddle, I got some practice in. Our corgi Oliver didn’t quite know what to make of the clacking noise coming from the garage, but he thankfully stopped barking from inside the house after a few minutes.

So, I’d been watching YouTube videos of top players in championship matches. It’s easy to be critical and think they should be doing even better . . . until you practice it yourself! You’d think it wouldn’t be hard to consistently hit the ball a few inches over the net—you’d think! But not so much. But the percentage of success will follow with practice getting used to the ball and the paddle.

Of Presidents and Paddles

My hope of squeezing in some pickleball Sunday, February 19 was squashed. I had bit the bullet and signed up for the Santa Cruz Pickleball Club email list previously on Tuesday, February 14. (Hey! St. Valentine’s Day!) The weekend of the 18th was pretty miserable. It was cold and rainy. A club email arrived saying the only two-thirds of the Derby courts would be open on Sunday for only part of the scheduled time due to a flooded court. Given that I had relatives staying at my house from Washington State and the inclement weather, I gave pickleball a miss. I’d have to do without for one weekend. I’d have to get my fix by learning virtually and maybe some practice in my garage. Alas. As it was, I spent part of the day talking to my friend John via email about the guys in the club who sold paddles.

I was off from work on Presidents Day, Monday, February 20. I figured I’d spend part of the day scoping out a local sporting goods store, Play It Again Sports in Soquel. I called them up and they assured me that they had pickleball paddles. I’d been researching paddles and was undecided on what model I was willing to spend $100 on, but I wanted to practice on my own, so I figured I’d see what they had cheap.

A Visit to the Sporting Goods Store

I walked in and a friendly clerk showed me to their pickleball section. I asked him if pickleball seems to be getting more popular. Holding back a laugh, he extended his left arm in the direction of the paddles, “That we have a pickleball section now at all shows that!” They had about a dozen paddles of a few different types.

I explained what I was after and he explained that they stocked low end and high end but no middle range paddles since the pickleball people either wanted super cheap or very serious. I told him what I was after, that is, something nearly disposable since I’d be replacing it shortly. Not wanting to hold him up, I told him that I’d browse their selection. To which he offered, “You can always look online too.” (Uh, kid, don’t you know that sales out of this store you work for covers your bi-weekly paycheck?)

Their low end paddles were very inexpensive. Only $15, which was great for my price goal. If I’d had no experience, I might have bought one. But these all-wood paddles were heavy. 12 ounces. I was used to a 7 ounce paddle from the ones I borrowed from the Santa Cruz Pickleball Club on Sundays. I didn’t want to practice with a lead weight on a handle!

Instead, I bought a package of pickleballs for $10. 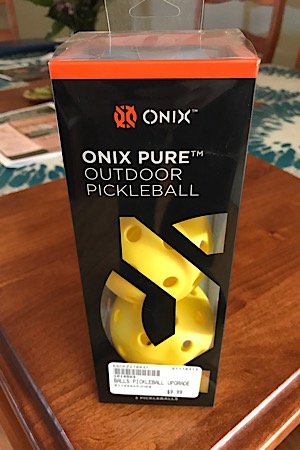 On my trip to the sporting goods store, I stopped by work and picked up a roll of 2″ wide white gaffer’s tape, a heavy-duty cloth tape. My goal was to take advantage of the large plywood panels the previous homeowner had used as doors to the overbuilt cabinets he’d constructed in our garage. I used the full width of the tape on the doors. I placed the top edge of the tape at 36″ . . . if I wanted to get technical, I could have placed it at 34″ to emulate the middle of the net, but I figured it was better to error on the high side (as the net is near the posts) than to error low and find me at a real court later used to a lower net! I ripped the tape in half and used that to simulate the kitchen line at 7 feet from the net. 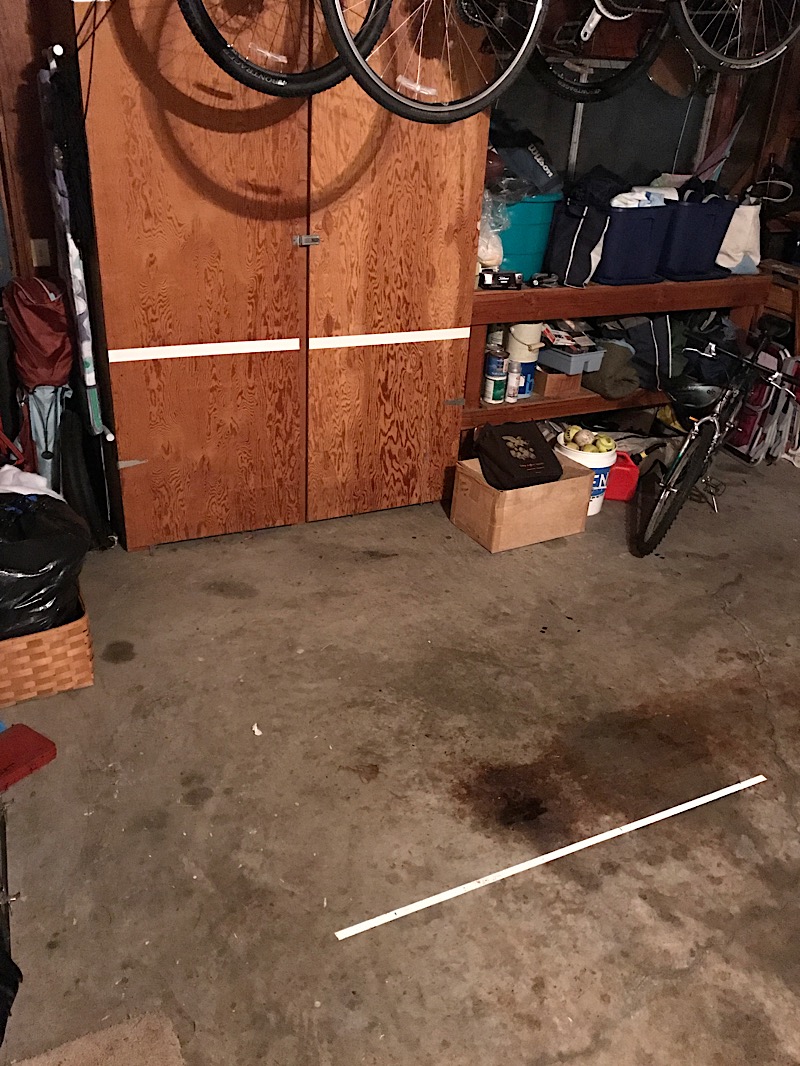 As long as I moved our car out of the space, I had my own little practice area.

No, the white bucket you see near right of the photo is not pickleballs. Those are softballs ready for Co-Rec league play in a few months. Managers get to store balls and bats all year for about 3 months of use. (I’m smiling.)

I was ready to practice dinking and maybe volleying. Dinking is part of the “short game”, it’s hitting a ball back and forth from one kitchen across the net into the opponent’s kitchen and back again. You want to keep the ball low over net so you don’t get a mouthful of pickleball smash!

Now, I just needed a paddle!

I continued to watch videos and listen to podcasts about pickleball. I explored buying a book or two, but figured I’d exhaust free resources first and maybe use the money for my own paddle first.

Sunday, February 12 marked my third trip to a pickleball court. Being a church-goin’ lad, this particular day I couldn’t arrive to the courts until about 10:15. It wasn’t a warm day, low-60s, but sunny.

It was on this day that one of the opposing players exclaimed, “I thought you’d said you’d only been playing for three weeks!” I did come into this with a bit of an advantage, having played some tennis in college. While I didn’t play on the UCSC team, there was one quarter where I had won both lotteries to get into both the offered tennis classes so I was playing four days a week. Those were fun times! I haven’t played much tennis over the years since, maybe 20 times in 30 years, but some of the young brain settings are still in there, apparently. I’m told that it’s not uncommon for those with tennis experience to play pickleball.

The International Federation of Pickleball has a player rating system which ranks players from 1.0 to 5.0. National champion players are 5.0 players. Players who have never played racket sports would could be 1.0 players, but you’d have to be pretty darn bad to be a 1.0 player. Perhaps 1.0 is a designation commonly only applied to children. I’m only guessing. Anyone who can play and regularly get the ball over the net are going to be 3.0 players. I figure I’m a 3.5 player and might be approaching 4.0, though 4.0 states “can use spin shots with some success”—that’s not me yet. I had a pretty mean spin on tennis serves and could slice my forehands and backhands back in the day, but pickleball is a different animal and I need to develop a new set of skills.

This was the first time I went against a left-handed player. When serving right to left, I knew from videos that you want to ideally serve near the middle of the court to the receiver’s left foot to force a backhand return which is usually a weaker shot. Me, not being a dumb guy, served near the outer corner of the court to off the lefty’s right foot, forcing a backhand. I was pretty proud of myself for figuring this out all by myself. It worked pretty well too. Only later, I saw this idea in a video . . . so much for my invented strategy. Old news! Rats. Of course it had already been figured out! The game has been around for over 50 years!

Most of the players had left by 12:30/12:45. The players who were left were good. And I mean solid. The women dressed in tennis outfits. You can imagine. It was guys against girls. As you might expect, with me on the guys team, we lost. But not too badly. This was an excellent learning experience. I was the weakest-skills player on the court, but I did ok. I didn’t embarrass myself . . . well, except that one time that I missed landing my serve. There isn’t too much excuse for that in pickleball, but it happens. It usually occurs when servers are trying to force a tricky shot. Or, in my case, simply missing the service court by a few inches! That’s why a lot of pickleball pundits recommend hitting more toward the center of the box—it gives you the largest margin for error. But I’m not that bad. I can generally place my serves somewhat reliably.

My guy partner (Kevin) pointed out a key strategy at the net: tracking with the ball. If the ball is hit to the left opponent, shift left in along the kitchen line. Conversely, if the ball goes to the right opponent, shift right. By doing this,  you close down the near sideline and reduce the likelihood of a passing shot . . . which I allowed, unfortunately, by not tracking!

I wrapped up my day about a quarter after 1 p.m. As we broke down the net and stowed the gear as the last players, we left the courts to the grouchy tennis player. He made some snide remark about pickleball to which one of the women players told him, “You should try it before you knock it!”

Theme by Anders Noren — Up ↑