Misadventures of Andrew Lenz and a yellow ball

First off, let me say that sometimes the WordPress system is a pain in the butt. I wrote a few paragraphs on my mobile phone and updated the draft. I got home, opened the draft on my computer and all my previous typing was erased. *grumble*

Our softball team had its seventh game on Friday night. I was in left field when a deep hit came in my direction. Only a little running was required, it was an easy catch to make. I raised my mitt along with my right hand for additional support. The ball was just about there. PAIN! The ball dropped from my mitt onto the ground. I picked it up—or so I’m told, I don’t remember that—and threw it in. I immediately trotted off the field holding my numb pinky finger and a replacement took my spot in the outfield. Broken finger? No, didn’t seem so. Bloody? A little. And a huge blood blister above the last knuckle on the inside of my right pinky finger. I spent the rest of the game icing my finger. I took a photo but no one really wants to see someone else’s blood and injury! You have been spared! As it is, two days later, the swelling has gone down, I can just about close my pinky completely and I’m simply protecting the blister with a Band-Aid. It still looks pretty bad, however!

Last night, I slathered the bottom of the insoles and glued them into my Costco shoes. Today, I didn’t notice them at all. They didn’t move. Success! Finally!

I arrived a few minutes after 9 a.m. and warmed up with Grita in heavy mist. Mike was the next arrival and joined our warm up. A few games ensued as other people arrived.

Kris (of Scotts Valley) made her first ever appearance at Derby Park. Nifty! She and I played against Gita and Mike. Grita asked, “Are you sure?” I was thinking, sure, they are stronger players but it shouldn’t be too lopsided. Uh. No. Kris and I got clobbered. I think the final score was 11-1 or 11-2. Grita slams her forehands and has solid backhands as well. If she had a stronger dinking game, she’d be absolutely deadly. While talking about pickleball signup list (separate from the club list), Grita asked Terry Long about the numbers on the sheet, meaning the grades. Terry explained they are for entering tournaments and told Grita that she’d be a 4.0 player and that if she developed her soft game, she’d move up.

Terry Long told me he had the loaned data stick, but I forgot to ask him for it later. (I was in a game at the time.) Play was stopped midmorning for some announcements. Grand opening ceremony for the Brommer courts on August 4. Terry will be offering free classes at Derby for those interested, just sign up. Of course, I forgot, so I emailed his wife Karen later!

A little after noon, a man around 30 named James appeared. He was from Washington but had recently moved to Santa Cruz County. He said he’s played pickleball on and off for a couple of years but played “too much” tennis in prior years. I had to remind him of being up at the net for receiving, but he’s a very good player—I’d say better than me. I offered to play a game with James against Ted and Oleg—who I found out later had only play two previous times! Oleg plays amazingly well for his 3rd time out. He must have had some prior racket sports experience. Or he’s from another planet. While Ted and Oleg made us work, James and I won 11-0.

We convinced Stuart to play as the fourth in a game of James and myself versus him and Oleg. Stuart is always hanging playing with the advanced players. This time, it was a much closer game—back and forth. Eventually, Jame and I edged them out and won 13-11.

Between the last two games, Stuart demonstrated that I wasn’t keeping my paddle up at the net. “80% of the shots are going to be backhands.” He held is paddle in a backhand position in front of his chest. “Above the net line.” One of the two remaining women on the bench—maybe Janet—chimed in, “He just won 11-0, he can’t be playing too badly!” But Stuart is right. A paddle doesn’t do any good hanging down by your leg!

It still takes me a while to get my game in gear. I was playing my best after I’d been playing for 3 to 3 1/2 hours. I have to figure out how to speed up that “warm up curve”.

I was disappointed with the game against Mike and Grita. I really need to develop a good drop shot and continue working on “slowing down the game”. On the flip side, I was proud of my performance in the last couple of games. Not perfect, but pretty good.

I didn’t realize it, but with the 4 hours of play today, I passed 150 hours of court time. How do you like that? 4 hours at one time is a first.

In the final point of a game I hit my first real “power backhand”. I hit it as hard as I could and it flew about 6″ above the net. They got a paddle on it (near the kitchen) but was returned harmlessly into the net. I got some compliments on that one. “Good way to end a game! Nice backhand!” I need to work more on that.

I guess another first is in the last game, I became aware of my own breathing. An accelerated heart rate is normal. Breathing faster is normal. Literally trying to catch my breath was a new experience. Stuart and Oleg had James and me really working!

Compliment of the Day

After loading the last net into the storage bin, Stuart shared, “You played well.” High praise from Stuart! 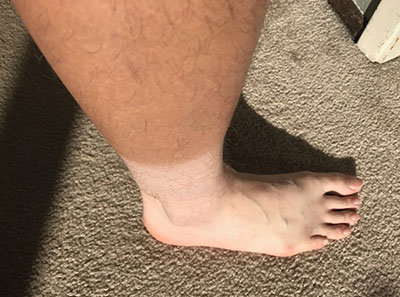 My wife said, “It looks like a chicken leg! Send a photo to Charlotte.” So I sent it to my daughter. Her response? “Gross.” You almost always get an honest evaluation from your teenage daughter!

I arrived at Brommer Park a few minutes after 9. The courts were already busy.

John P.’s wife Diane was there! I opted to play with her against her husband and Mike. We lost but we didn’t get completely crushed. Diane has tennis experience and that showed, plus she’s played a few times before, I believe. She’s still figuring out when to be up and when to be back, but has good hand/eye coordination.

I sat down next to Rich and asked how his shoulder was doing. I could tell from his delay in responding that it wasn’t improving. I answered for him, “Same-o, same-o.” I believe I overheard last time that he was going to have to have surgery. “From the back, I thought you were Kevin earlier,” he said. “You made some nice shots.” Kevin and are about the same height and have similar brown hair color. He’s probably got about 10 years on me and I have about 20 pounds of flab on him! What’s funny is while playing one game, a ball rolled into our court and even Dave Allenbaugh yelled, “Hey, Kevin, ball . . . oh, Andrew!” Anyway, to have my play mixed up with Kevin’s by Rich is very high praise. Kevin is a better player than I am.

I gave Terry Long the datastick that I’d prepared for his wife Karen. While she suggested that they’d both watch it together, Terry smiled and volunteered that it’d be a good idea if he didn’t—being married and all!

Dave A. and I played against Gary and Bev. We got to 10-3 but just couldn’t put them away. They got back to 10-7 and finally finished off the game, but it went back and forth.

At about 10:45, a woman signed up as an “Intermediate” (the lowest available) and it was her second time out. No one was signing up with her, so I did. (Hey, I was a newbie not too long ago.) Another woman, also only played twice added her name. Jerry Louis was willing to be the fourth and we were onto a court. Jerry and I definitely took it very easy on the two of them—he on one side of the net and me on the other. One woman (with a tennis background) was definitely strong than the other but both were obviously very green. But they had a good time.

The last game was a young guy (30?) named Clay from Los Gatos. Clay’s about 6′ or 6’1″. We took on Barb and Judy. For this particular game, we won handily, 11-2. We both played really well. Clay is a quiet and humble guy. Had I known he was as strong a player as he was, I wouldn’t have suggested, “Guys against girls!”

Last night, I had emailed Karen Long a photo of her ATP shot and thanked her for playing with me/us. She said it’s relaxing to play a game where you don’t have to meet certain expectations and not count unforced errors—I’m sure not literally count, but you know. There’s less pressure playing against weaker players. Another email followed shorting asking if I would share the videos that I took of those two games. Of course. There’s now a datastick in my backpack for her!

I arrived at Skypark at about 10 minutes to 7. Things were hopping. I took a seat on the bench and waited about five minutes for a game to open up. Neighbor Dave was there as was Allan, Eric, Ted, Mark (Maree’s husband), and a few Scotts Valley regulars such as Mark Dettle, Larry, Kristin (tall, pleasant) and a few others. 25 people, give or take. Cheryl (site organizer) wasn’t there which was too bad, she’s another one of those fun people to play with.

Dave and I played a game against Eric and Ted. I’m glad that one was not on video. My first few games are generally not that great—hopefully, someday, I’ll be able to walk onto a court and play solidly.

I played a few games with and against a woman with short hair named Debbie (whose daughter just graduated from UCLA she said)—I was wearing a UCLA T-shirt. UCLA is where my son Nicholas is studying Applied Mathematics.

It seems that it takes me a while to warm up to the point of playing decently. About an hour or four games. I had some miserable shots. Out of the two hours of constant games, I think I missed two serves—one a few inches right of the sideline (going for the backhand) and one that was a few inches long. I had a few returns sail too deep—overdoing the Jerry method of returns.

I had some good shots, but overall, it was not an evening where I was happy with my play.

A consistent issue is popping up winners for the other side. Gotta. Keep. It. Low!

Things wrapped up just about 9 p.m. I stopped by work on the way home since the alarm had gone off. An officer was onsite but nothing seemed amiss, so I thanked the officer and we both headed on our ways. Home for dinner!

Theme by Anders Noren — Up ↑